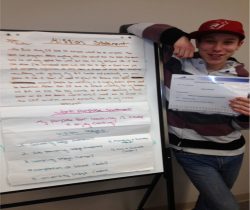 BACKGROUND           The Chase Employment Centre (CEC) decided to begin a 6 month Work Placement Program with a 5-day Implicit Career Search workshop. The goal of the overall program was to provide a group of first nations youth with some basic employment skills and, for most, their first experience with formal work. ICS was included with the intentions of providing the participants with motivation, self-esteem and a long-term career plan that would not only assist in determining where the job placements would take place but would help the participants plan for work life beyond the program.

PROCESS                     Dylan, a nineteen year old who, to this point, had experienced life in a number of foster homes, quickly became the leader of the group and not always in a positive fashion. He was skeptical about the overall program in general and the five days of sitting around in a classroom doing ICS in particular. “Why not just get out to work?” he would often plea. He challenged every premise of the program; “What does self-esteem or feelings have to do with finding a job?” “Why plan when we have no idea what is going to happen to us?” As the program progressed the facilitator began to recognize a sharp and inquiring intelligence behind Dylan’s questions and challenges. When Module 3 (Personal Definition) began, Dylan’s curiosity increased and his skepticism lessened.

The concept of him deciding what kind of a person he would be was at first novel then became an epiphany of sorts. He felt the freeing power of self-determination and realized that he could choose his life, and his self-concept, to a far greater degree than he had previously thought.

OUTCOME                   Dylan formed a career plan by the end of the workshop and, as you can see in the accompanying picture, proudly presented it to his peers in the group and to the employment facilitators at the agency. He completed a placement at an A&W restaurant and after that took a full-time job at Subway Restaurants, then Wendy’s.

Dylan is now a successful male model, also working in security to augment his income.

The other seven participants also completed their career plans, took job placements and went on to independently follow their career plans after the placement program ended. One of the most poignant statements made during the ICS portion was from the youngest member of the group who, on the morning check-in of the second day, said  “This is the first workshop I have taken that is about me! It helps me understand me!”

Asked to sum up his learning from ICS Dylan responded: “Life is precious and every turn is a new lesson to learn. It is really a beautiful thing.”